Delhi Capitals has become the first team to complete its squad in IPL 2022. They bought 20 players in IPL Auction 2022 and retained 4 players. In this way, there are 24 members in the team of Delhi Capitals so far. An IPL team can have a minimum of 18 and a maximum of 25 members.Delhi Capitals has spent the maximum amount on bowlers and all-rounders in IPL Auction 2022. So until his entire Delhi Capitals team Players List 2022 was formed, the batting looked somewhat inexplicable. However, in the end, he has overcome this shortage to a great extent by buying West Indies’ attacking batsman Rovman Powell.

Delhi Capitals has added match-winner batsman like David Warner with them. He will be seen opening the innings with Prithvi Shaw. Rovman Powell, Mandeep Singh, Sarfaraz Khan, Ashwin Hebbar and Yash Dhul can be seen batting along with skipper Rishabh Pant in the middle-order for Delhi. Yash Dhul was the captain of the team that recently won the Under-19 World Cup. He is being seen as the future star of the Indian team.Mitchell Marsh, Axar Patel, Shardul Thakur, Lalit Yadav will be present as all-rounders in Delhi’s team. These all-rounders will have the responsibility of reducing the pressure of the middle-order. You are here to get DC IPL Team Squad 2022, so get it now, Shardul Thakur can prove to be a trump card for this team. 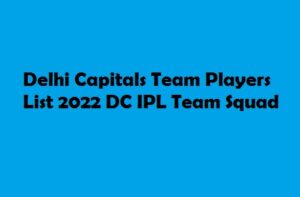 The mega auction of the 15th season of the Indian Premier League (IPL) has concluded in Bangalore. After the conclusion of the first day of IPL Auction 2022, the number of players of Delhi Capitals was 13. Out of these, 4 players were retained by Delhi, while on the first day of the auction, Delhi Capitals bought 9 players. Delhi now has a total of 24 players, out of which 17 are Indians and 7 are foreign players. A team can have a maximum of 25 players, while 8 foreign players can also be added to a team so now below we have IPL DC Team 2022 Mega Auction Players List, check it now.

What about the bowlers in DC team?

Enrique Norkia, Mustafizur Rahman, Lungi Ngidi, Chetan Sakaria, Khaleel Ahmed, Kamlesh Nagarkoti and Kuldeep Yadav will be responsible for the bowling of Delhi Capitals. The three left arm pacers, led by Norkia, can become the strength of the team, who will also be helped by Shardul Thakur and Mitchell Marsh. Axar Patel and Kuldeep Yadav will handle the spin bowling.

Did DC buy any new player?

Delhi Capitals has managed to buy big and small players in IPL 2022 Mega Auction. T20 WC winners David Warner and Mitchell Marsh were acquired by the team for lesser prices. KS Bharat and Mustafizur Rahman were bought for Rs 2 crore respectively. Shardul Thakur was bought by the team for 10.75 crores.

Who is the owner of Delhi capitals team of IPL?

Delhi capitals belongs to GMR Group and JSW Group and it began as Delhi Daredevils in IPL 2008 before the name change. Daredevils began on a great note in the first season when they reached the semi-final but since then they continued to struggle. After the name change, they have really done well in the league.

Who are the retained players and there price in this IPL team?