The film on Team India’s first World Cup victory 83 Movie will be released in theaters only. This is the 37th year of winning the World Cup. The special thing is that the film is going to release in December on the Christmas. The date has been set as 24 December 2021. 83 will be released in 5 languages Hindi, Tamil, Telugu, Kannada and Malayalam. 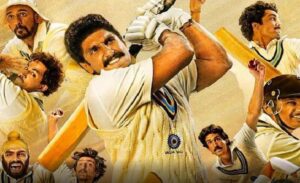 Deepika Padukone will once again share the screen with Ranveer Singh in the film. She will be in the role of Kapil Dev’s wife Romi. This will be the fifth film of Deepika-Ranveer duo after Padmavat in 2018. Direction is by Kabir Khan. The film will also release in 3D. Ammy Wirk, Hardy Sandhu, Pankaj Tripathi, Tahir Raj Bhasin are also in the movie. The film is based on the 1983 Cricket World cup. Ranveer Singh is playing cricketer Kapil Dev’s Role in the movie. Earlier this film was scheduled to release on 10 April 2020. But the worldwide lockdown due to Corona virus stopped it. However, its release date has not been finalized yet.

The trailer of the film 83, based on the 1983 Cricket World Cup, has been released, which is being well-liked by the audience. This film is going to be released on 24 December this year. Apart from this, many Bollywood movies are coming  in December month.You can also watch 83 Movie Trailer on this page.